As of the last day of the month, there are only 32 days before I leave for the 2014 State Convention. As a result, the prime focus of our work in April was on pinning down speakers, setting a tentative agenda, and making sure all arrangements have been made. I am excited to report that our tentative lineup should be of great interest to the delegates.

On Thursday, we plan to have a salute to Governor Perry, which will be a great way for delegates to give him a big thank you as he finishes out his term. We will also have breakout sessions. These were a big hit last convention. The breakout session concept allows delegates to pick from multiple topics they wish to hear from experts and interact with Republican elected officials. This was never done at a previous state convention prior to 2012. The feedback was so positive that we have expanded it this year so this convention will have three different times for breakout sessions with two on Thursday and one on Friday. Having three different breakout times allows delegates to not miss out on their favorite topics as some of the sessions will be repeated.

We expect Senator Cornyn on Friday and Senator Cruz on Saturday to address the convention. We also have a special event planned for the Grassroots Club. In addition, delegates will have an opportunity to hear from the top of our statewide ticket as well as hear a keynote speech by Senator Rand Paul. Friday evening will feature a fundraising gala, the proceeds from which will help offset the cost of the convention. The prices are $200 per ticket and they will be well worth it as we have an evening planned saluting courageous Republican woman from around the country. We are excited that we have three prominent national Republican leaders who will be speaking at the event. They are Senator Kelly Ayotte of New Hampshire, Senator Deb Fischer of Nebraska, and Lt. Governor Rebecca Kleefisch of Wisconsin. For more information about the gala, click here.

A lot of people ask me why the gala is so expensive. The reason is it is imperative that the gala raise a sufficient amount of money to help offset the cost of the convention not covered by the facility fees. What most people don’t know is the facilities fees we ask delegates and guests to pay provide less than half the funds needed to pay for the convention. The convention cost $950,000 in 2012 and we expect a similar cost this time. Facility fees are only expected to generate between $350,000-$400,000 worth of income, thus we have to make up the difference from sponsors, booth sales, and program sales. But even with sponsorships and sales, the convention would still not pay for itself without the gala. Thus the primary purpose of the gala is to ensure the convention pays for itself and possibly even make a little money. To accomplish this, the tickets have to be the relatively high price of $200 per person. Fortunately this was not an issue last convention at which gala tickets were also $200/person and yet still had excellent attendance. I would urge all of you to buy tickets now as seating is limited to approximately 1,200. With approximately 11,000 delegates and alternates elected to the convention, it’s possible the event may sell out so you should buy your tickets now.

The convention won’t be all business, however, as we have special entertainment lined up including singers, bands, etc., that should add to a lively and entertaining atmosphere. Our popular videos will also be back this year as well as new ones to show you. All in all it should be an exciting event and we urge you to register now in order to avoid lines at registration during the convention as well as to help the party have sufficient cash flow prior to the convention. 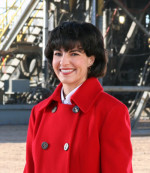 We also continued our work on Victory operations last month as Railroad Commissioner Christi Craddick accepted my invitation to be our statewide Victory Chair. This is an extremely important post as its prime purpose is to raise the necessary money for our get-out-the-vote operations and Victory centers. I am confident Commissioner Craddick will do an exceptional job. In April we also expanded our Victory centers with openings in Dallas and the Valley.

Moreover, we also hosted another block walk during which hundreds of volunteers phone banked and knocked on thousands of doors. We had a great turnout thanks to the help we received from staff members from Attorney General Gregg Abbott, Senator John Cornyn, and State Senator Glenn Hegar. We would also like to thank all elected officials that came out to rally the troops including Andy Nguyen, Jennifer Hall, incoming Harris County Chairman Paul Simpson, and more. This was our third statewide block walk as part of our campaign to reach hundreds of thousands of swing voters personally. We have our fourth statewide walk set for May 17th so sign up today.

I was also able to do my usual traveling around state throughout the month. During the first week of April I attended the Alliance for Life leadership luncheon in Austin. I then went on to Lampassas to speak to local republicans. The following week I was back in Austin to speak at the Barry Goldwater Society at the LBJ School. I then traveled to Fort Worth to speak at the Young Conservatives of Texas convention. 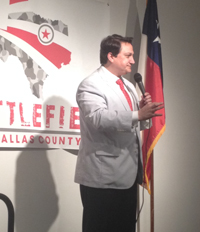 The next day I was supposed to help kick off the statewide block walk but had car trouble. Fortunately, I was able to get a car in time to drive to the Grayson County annual fundraiser. The following week I was in Houston where I was a speaker at the Harris County GOP Leadership Council fundraiser at which State Senate District 7 candidate, Paul Bettencourt, spoke. Current County Chairman Jared Woodfill and incoming County Chairman, Paul Simpson, were both in attendance as a sign of party unity.

The following day I had the opportunity to attend the Hittner Family Passover Seder which was attended by more than 200 community leaders. The following day it was back to Austin where I met with the Director General of the Houston Consulate for Taiwan. The following day I attended a CEO event honoring Dick Weekley for his longtime political work. The following week I was present at the opening of the Dallas Victory Center which is a joint project with the Dallas County GOP, RPT, and RNC. Chairman Wade Emmert served as master of ceremonies to help fire up the troops. Congressmen Sessions and Marchant both spoke and we had an excellent turnout. The RPT already has two full time employees at the Victory Center, Brian Flores and Josh Peltier.

During the last week of April I attended the National Prayer Breakfast in Austin as the guest of former GOP chaplain, Bob Long and his wife Sue. The following day I was on a teleconference with RNC Chairman, Reince Priebus, about possible alterations to the national party rules to gain control of national debates. I support the effort for Republicans to control who the moderators are and the format of debates so that our candidates are only debating each other and not the press. I also think the 23 debate schedule from last time was too long as was counterproductive. Chairman Priebus has proposed that the RNC sanction debates and has input as to who the moderators will be. His proposal considered somewhere between 8 and 11 debates. Under these guidelines, if any candidate appears in a non-sanctioned debate, their number of delegates will be cut. I support this general concept although I want to make sure there are enough debates to allow an unknown candidate to have an opportunity to compete. However, overall I do think the party needs to control the debate process instead of the national media.

On the financial front, we are in excellent shape. We ended the month with over $1 million in all of our accounts after payroll and all bills paid. We have already paid for half of the convention but paying for the other half will be a challenge and could diminish our cash balances. We are hopeful that if we get a good turnout at convention and if all of our sponsorships come through, that the convention will not be much of a cash drain on the party, if at all. There is also an outside chance we could make a little money on the convention as we did in 2012.

A sad note, in April we saw the passing of former State Chairman and former State Legislator Ray Hutchison, husband of former Senator Kay Bailey Hutchison. His passing marked the end of an era for me personally as he was State Chairman at the first state convention at which I was an alternate delegate in 1976. I also was a volunteer for him in his campaign for governor. Ray devoted many years to public service; not only did he give countless hours of his time to the Republican Party but he was also a community leader in the DFW area and he will be missed.

Finally let me urge all of you to consider attending the state convention even if you are not a delegate. Participating in the convention will be a great way for you to help give Texas an early voice in the 2016 presidential election through the straw poll, it will be a way to demonstrate our enthusiasm, and there will be training and breakout sessions from which much knowledge can be gained. I am looking forward to an exciting convention in Fort Worth on June 5th-7th. I hope to see you there. Register today!