In case you missed it… 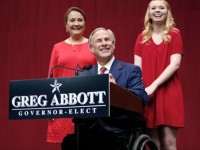 In case you missed it …

We all know that Republicans won big on Tuesday night and it’s not by accident.  The grassroots support from across the state made millions of phone calls and knocked on hundreds of thousands of doors.  And while we suspected we were going to win, we didn’t realize it would be by such big margins.

The entire state is now an even deeper shade of red, which means we Texans get to enjoy prosperity and liberty for at least another election cycle. We’d like to congratulate these county chairs whose counties voted for Bill White for Governor in 2010 but in 2014 voted for Greg Abbott:

Thank you for your work to keep Texas Prosperous by Keeping Texas Red!