"Ray Anderson Barnhart was State Chairman of the Republican Party during a critical juncture of the party’s history. Elected in 1977, he served throughout the 1978 general elections which resulted in the election of the first Republican Governor since reconstruction, Bill Clements. The Party’s success in electing Clements ushered in a new era for the Republican Party as holding the governorship provided many advantages for party building. Ray Barnhart certainly deserves a tremendous amount of credit for that success. 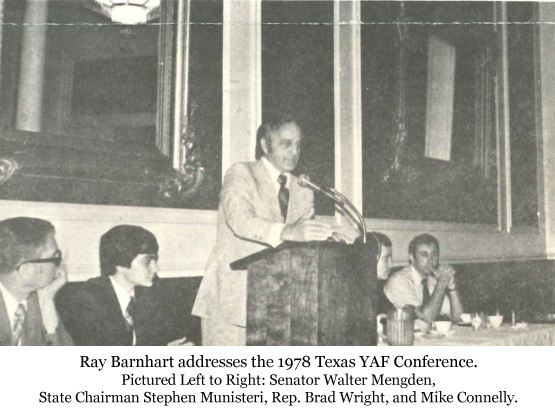 What may not be generally known about Ray is that he also deserves credit for the ascendance of Ronald Reagan to the presidency in 1980. In 1976, Ray was appointed State Co-Chairman for the Reagan Primary campaign for Texas along with former Midland Mayor and RNC Committeeman, Ernie Angelo. Virtually all Republican elected officials then supported President Gerald Ford for re-nomination, but Ray and Ernie put together a successful grassroots insurgency against long odds, the likes of which the state has not seen since. At the time of the May ‘76 Texas primaries, Ronald Reagan had lost every primary from New Hampshire in February up until the May primary in Texas with the exception of one sole win in North Carolina many weeks earlier. At the time of the May ‘76 primary, virtually all political pundits had written Reagan off and his campaign seemed doomed, barring a political miracle.

Despite calls for Reagan to drop out from the race, Ray fought for Reagan to stay in and continued to rally the Reagan volunteers with a message of hope and optimism. The end result was a landslide victory for Reagan over Ford in the May ‘76 primary, winning 100 of 100 delegates. This not only propelled Reagan back into the race for President, but by that summer had resulted in Reagan drawing even with Ford in the delegate count and actually outpolling him by ½ million votes. Although Reagan missed the nomination by a small margin at the National Convention, the closeness indisputably positioned Reagan for the nomination in 1980, despite him being a record 69 years old at the time. Thus Ray Barnhart, in conjunction with Mayor Angelo and a group of other Texas leaders, put the party on a course to not only nominate Reagan in 1980, but also change the world forever with his election to the Presidency in November. Ray should be remembered for this contribution to our history which is chronicled in Gilbert Garcia’s book, Reagan’s Comeback.

When I was a 17 year old high school student, I called the Harris County Republican Headquarters at the end of 1975 and asked how I could volunteer for Ronald Reagan. Ray called me back himself and put me to work. This allowed me the great fortune and privilege of witnessing all this first hand as a volunteer in the Reagan Headquarters. My involvement in the campaign and the Conservative movement was a direct result of the encouragement, mentoring, and friendship of Ray Barnhart for which I will always be grateful. Ray encouraged me to get involved in conservative politics and introduced me to the Organizational Director for Reagan who was also the Regional Director for Young Americans for Freedom, Coby Pieper. Coby, who passed away in 1979, is the one who recruited me into the Y.A.F. Ray not only provided encouragement for me to join the conservative movement but was always there to lend advice and support. He regularly accepted my invitations to speak to Y.A.F. and Young Conservatives of Texas clubs around the state, signed every fundraising letter we asked him to, served on our advisory boards, and even made sure that I and other Texas youth received tickets to every session of the 1976 national convention.

Above all he served as an example of service by sacrificing his time, money, and business fortunes to work to preserve freedom for the country that he loved so dearly. It is not an exaggeration for me to say that I would not have been set on course to be State Chairman had it not been for Ray Barnhart returning my call 38 years ago. Texas lost a true patriot and many of us in the RPT and the state of Texas will always be in his debt. My sympathy goes out to his family, especially his wife, Jacqueline, and his grandson, Reid Rousselot, who is an active supporter of the Republican Party of Texas. May Ray rest in peace."