A year and a half ago, Democratic Obama operatives boldly pronounced that they were going turn Texas blue. Tens of millions of dollars spent on their behalf later, Texans defiantly answered by bestowing on our entire ticket landslide victories. It is arguably the finest night in the Republican Party of Texas’s modern history, as our entire statewide ticket swept the Democrats by huge margins. 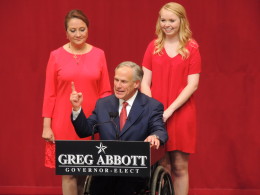 In addition, the RPT increased its overwhelming majorities in the State House and Senate, thanks to the efforts of strong candidates such as Konni Burton, who not only won Wendy Davis’s old Senate seat but won it by over 15,000 votes. With Burton’s win, the RPT now holds 20 of the 31 State Senate seats, tying the all time record. Also thanks to the efforts of Congressman-elect Will Hurd, we were able to maintain a large majority among the congressional delegation while ousting one-term Congressman Pete Gallego. With Hurd’s win, Republicans now hold 25 of the 36 congressional seats in Texas, also tying the all time record. Will also made Texas history by becoming the first Texas Republican Congressman of African American descent to win a seat in Congress since reconstruction.

Last night, most of our statewide nominees were in Austin celebrating the victory along with hundreds and hundreds of other elected officials, Texas GOP leadership, and grassroots activists from across the state. Our nominee for Governor, Attorney General Greg Abbott, now Governor-elect, delivered his acceptance speech with the new First Lady of Texas, Cecilia Abbott, as well as daughter, Audrey and other family members. In his speech he talked about his journey on the campaign trail over the last two years. He spoke about the great work Republicans have done in Texas under Governor Perry’s tenure and how he plans to keep moving Texas forward in education, border security, and maintining Texas’ status as the number one job creator in the United States.

U.S. Senator John Cornyn helped fire Harry Reid by being re-elected by the stunning margin of 27%. Senator Cornyn, in his remarks, spoke about the landslide victories we saw by Republicans not only in Texas, but throughout the country, and the opportunities Republicans will have in Washington D.C., now that we have majorities in the House and Senate once again.

In addition to the election night stars, the party faithful also heard from two existing stars in Senator Ted Cruz and Governor Rick Perry. Senator Cruz met an enthusiastic crowd when he got up to speak about how thankful he is that Texas continues to be the model for Republican politics across the country and how he plans to work with Senator Cornyn and his new majority in D.C. to undue the damage done by President Obama and Harry Reid over the last 6 years.

Governor Rick Perry gave a bittersweet speech as he congratulated Greg Abbott for his decisive win to take his place in just a few short months. He spoke about the great accomplishments that Republicans have achieved during his 14 year tenure as Governor and congratulated the other newly elected statewide officials that helped cement yet another historic victory night in Texas.

Statewide Victory Chair, Christi Craddick, who did a stellar job as Chairman of the Victory Committee, addressed the crowd, thanking everyone who supported our Victory efforts this year. She spoke about how it would not have been possible to open Victory offices 18 months ago and run the largest grassroots campaign operation this state has ever seen without the help of loyal Texas conservatives. She also spoke about how the Texas GOP is poised to keep many of our Victory offices open and staffed as we enter 2015 and begin to prepare for our next challenges in 2016.

RPT State Chairman Steve Munisteri was emcee for the evening and issued the following statement regarding the night: “This was a truly historic night for the RPT as well as the people of Texas. For we not only ushered in a new generation of leadership for the state, but we also extended our statewide winning streak to 20 years, the longest in the country. This was accomplished because we had excellent candidates, we had the help of tens of thousands of volunteers, and an incredible state party staff, led by Executive Director Beth Cubriel, Victory Director John Jackson, and Political Director John McCord. The party’s engagement efforts played a critical role as well, led Daviz Zapata, Director of Hispanic Engagement, Tommy Coleman, Director of African American Engagement, and Melissa Fwu, Director of Asian American Engagement. It also was engineered by the best political campaign team I have ever observed. Dave Carney, Chief Strategist for Governor-elect Abbott, is truly a political genius. Campaign Manager Wayne Hamilton and Deputy Campaign Manager Sarah Floerke did an amazing job organizing thousands of volunteers who went door to door across the state. Their ground game was head and shoulders superior to the Davis ground game and was one of the main reasons the margin was so lopsided.

I would like to especially thank Chairman Craddick, who helped raise the money to fund our Victory program and RNC Chairman Reince Priebus, who had the foresight to provide us the necessary resources to assist us in opening Victory centers a year and half ahead of time. I want to congratulate all of our elected Republican officials and I look forward to Governor-elect Abbott, Lieutenant Governor-elect Patrick, Comptroller-elect Glenn Hegar, and Attorney General-elect Ken Paxton working with our House and Senate leadership to move Texas forward.

I would like to thank Senator Cornyn for the help he gave the state party in raising money for Victory as well and looking forward to him being part of the new leadership in the Senate that will attempt to undo the damage caused by the Obama administration. At the end of the day, we won by huge margins because the vast majority of Texas voters agree that the conservative government that has been established by the Republican Party has worked in the past and is our best chance for a bright future for Texas.”