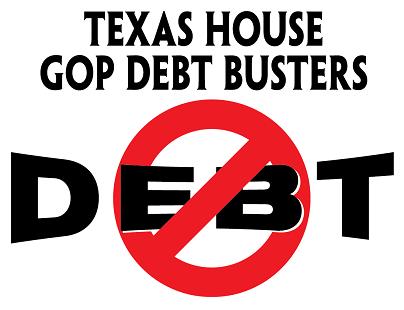 AUSTIN – Several weeks ago, Rep. Jim Keffer, along with spokespersons Rep. Jodie Laubenberg and Rep. Larry Taylor, announced the formation of the House Republican committee to retire the state party debt called “Debt Busters.” At the time, the Republican Party of Texas had already paid down its debt from $680,000 to $350,000. The Debt Busters goal was to encourage office holders to contribute to a fund to completely eliminate the party debt, so that the RPT could focus on the election of its candidates in this upcoming November election.

The RPT is pleased to report that as a result of the Debt Busters and other elected officials’ contributions, the RPT has been able to further reduce the debt to approximately $165,000 (after taking into consideration discounts for paying on time.) RPT is happy to also report that the Debt Busters who originally indicated that they had received pledges of $200,00, have delivered on $181,500 of that original pledge and have since obtained pledges from several other representatives that bring the total pledges to $212,600, plus an additional 8 representatives have joined Debt Busters who have committed to sending in additional funds, but not yet decided upon a specific amount.

The RPT is confident that these remaining legislators, along with help from a few other elected officials, will allow us to fully pay off the party’s debt by the end of the year. Currently, 63 out of 77 House Republicans have pledged to assist the Republican Party of Texas in a wonderful show of party unity. While we thank all of our members for their generosity, the RPT would like to give special recognition to those representatives that have given or pledged amounts at or in excess of $5000. These representatives include: Dennis Bonnen, Dan Branch, Bill Callegari, Byron Cook, Brandon Creighton, Myra Crownover, Rob Eissler, Charlie Geren, Chuck Hopson, Todd Hunter, Jim Keffer, Susan King, Edmund Kuempel, Tyron Lewis, Jim Pitts, Todd Smith, Burt Solomons, Speaker Joe Straus, and Vicki Truitt.

We would also like to thank State Senator Tommy Williams and U.S. Congressman Jeb Hensarling, who have both indicated that they will be sending in contributions as well. We are also grateful to Governor Rick Perry for holding a fundraiser for us, which raised $25,500. Senator Hutchison and Harris County Judge Emmett also held successful fundraisers; Sen. Hutchison’s raising $67,900, Judge Emmett’s fundraiser raising $95,510.

Chairman Munisteri stated, “I am very grateful to Representative Jim Keffer who has spearheaded our Debt Busters. He made a personal committment to help the RPT erase our debt, and he has a been a man true to his word, as has his colleagues. I wish to thank all of our representatives, and we are hopeful eventually, to obtain 100% participation of the state reps, in a dramatic show of party unity.”

Representative Jim Keffer said, “I started Debt Busters because I believe in a strong Republican Party of Texas and thought it important that the party be fiscally responsible. We purposely invited all House Republicans to participate as a show of unity. I am delighted to hear that my colleagues have come through on their pledges and I look forward to finishing the job of paying off all RPT debt by the end of the year.”

Register to Vote
Back to the top