Even with a small staff, the Republican Party of Texas has been able to accomplish a tremendous amount of work and activity in such an unusual election year. We are very fortunate to employ a group of talented and dedicated individuals who have been working diligently to keep the Party on course through all of the changes and upheaval of the 2012 election cycle. 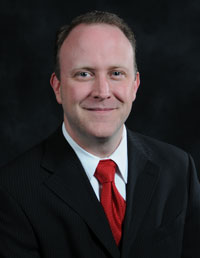 We are sad for our office (but very pleased for him!) to announce that the hard work and leadership of RPT Executive Director Jesse Lewis has brought him a wonderful opportunity to advance his career in the private sector. Effective this week, Jesse has accepted a new position as an Associate Director of State Government Affairs for Bristol-Myers Squib, representing a multi-state region in the southern United States. Even though Jesse had already been selected for the position, he worked with his new company to delay the start of his new job until he had guided the RPT through the State Convention. Even when he could have easily stepped away from the Party right before the event to prepare for the new job or even just to enjoy some time off, Jesse led the Party and staff through the most successful Convention in our history and stayed at the Party an additional week to help Chairman Munisteri with the bulk of the post-convention wrap-up. Although we are very sad that Jesse will be leaving us, Chairman Munisteri and the rest of the staff wish him the very best of success in his new position and look forward to seeing him around Austin as he will maintain his residence in the area.

In approaching the task of hiring a new Executive Director, Chairman Munisteri felt that it was appropriate to promote from within to fill the position and to re-evaluate the office organization to increase the reach of our efforts. Since 2010, the Party has solidly moved back into a stable financial and political position and gradually increased the number of staff back up from a low of six full-time employees. With increased staff and a 19-month streak of being debt-free, the Chairman felt that it was an appropriate time to revisit the past RPT practice of employing an Executive Director and a Deputy Executive Director, each with unique job responsibilities.

Therefore, the RPT is also pleased to announce that effective immediately, Beth Cubriel has been promoted to RPT Executive Director. Beth has served as Organization Director for the Party for over a year and has been a major force in the State to make our Primary Elections possible in this unusual year. She is a longtime Texas Republican political professional and formerly worked as Texas State Director for U.S. Senator John Cornyn, overseeing 7 offices and a staff of 14. Beth and Randy have two daughters and make their home in Northwest Austin.

Also effective immediately, Chris Elam has been promoted to RPT Deputy Executive Director. Chris has served as Communications Director for the Party since 2010 and has been the person who relayed all of the updates and news items to Texas Republicans through our email blasts and through the statewide media. Before moving to Austin to join the State Party, Chris worked as a political consultant based in Fort Bend County and directed races throughout the state. Chris and his wife Christy have two sons and live in Austin.

In other staff news, Cassie Daniel will be replacing Beth as RPT Organization Director and is already working to transition into the role. Cassie formerly worked in the Texas Capitol and as a West Texas field director for Governor Rick Perry in 2010. She was instrumental in helping RPT fill all of the 254 County Chairman positions this year so that we could hold a statewide primary election and has been coordinating with county chairs throughout the state during all the changes and challenges of this cycle. Also, a search for a new Communications Director is already underway and we hope to announce that new hire soon.