During the 2022 Texas GOP State Convention the Republican Party of Texas partnered with co/efficient, a research and analytics company with over 30 years of experience in political, nonprofit, and corporate campaigns, to conduct a straw poll of the Delegates discussing pressing issues and future elections. Delegates were invited to participate via their mobile device for a 24-hour period, beginning Thursday, June 16th.

2024 PRESIDENTIAL RACE: In a question with former President Donald Trump as an option, Trump gathered 54% of delegates, with Florida Governor Ron DeSantis second at 30%. Texas Senator Ted Cruz came in third with 4%.

When former President Trump is excluded as an option, Governor DeSantis is the first choice for 71% of GOP delegates, with Senator Cruz second at 9%, followed by Senator Rand Paul and former Governor Nikki Haley both at 3%. 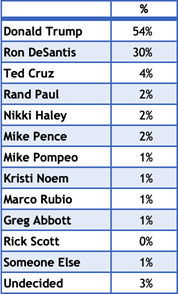 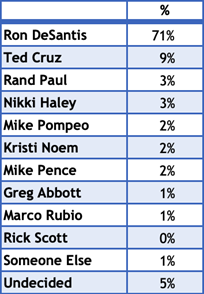 You can view the full results here.