In the November Chairman’s Update, Chairman Munisteri alluded to the fact that there would be an upcoming, exciting announcement about plans for Victory 2016. Today, the Republican Party of Texas is excited to reveal what those plans are.

With a promise of continued support from the Republican National Committee, an anticipated quarter million dollars leftover from Victory 2014, and an anticipated end-of-year balance of approximately $800,000 in RPT funds, the RPT has determined that it will be able to continue to operate year-round Victory operations, including offices and staff around the state. In the past, it has been the practice of the RPT to open Victory centers a few months before elections, hire temporary staff, and then close the centers soon after the election. This practice has the disadvantage of making it difficult to find full-time, quality employees, as well as risking loss of information and databases. Moreover, the Democrats have successfully maintained year round operations in battleground states for years, which has been a great advantage to them in key states such as Ohio and Florida.

The State Republican Executive Committee recently approved a budget which allows the continuation of our Victory program, and with financing now in place, we can confirm the retention of the following Victory staff and operations:

John McCord, current Political Director for the RPT, will take on the added role of Statewide Victory Director.

Ann-Marie Craig has been promoted to Statewide Field Director and will continue to operate out of Tarrant County. She will also be responsible for expanding the Victory efforts into Denton County, Collin County, and surrounding areas. In her new supervisory role, she will be responsible for formulating and instituting best practices and programs across the state. Her office will also test out new ideas and programs to determine feasibility.

Roseanne Rodriguez has been promoted to Southeast Texas Regional Field Director. She will continue to base her operation out of Harris County and will also be responsible for expanding further into the southeast region, including the key counties of Ft. Bend, Montgomery, Galveston, and Brazoria.

Kattie Torres will be retained as the Victory Field Representative for the Bexar County area and will be responsible for expanding her Victory efforts into South Texas.

Darrel Hillenburg will be retained as a Victory Field Representative and will continue to operate out of Nueces County. He will be responsible for Kleberg, Jim Wells, San Patricio, and Bee Counties.

Crystal Rodriguez will be retained as a Victory Field Representative for the far west part of the state. She will continue to operate out of El Paso County.

Brian Flores will be retained as Victory Field Representative and continue to operate of out Dallas. He will also be responsible for our expanded efforts in Rockwall County.

In addition to the Victory obligations, Roseanne, Kattie, Crystal, and Brian will have additional engagement duties working under the direction of Statewide Hispanic Engagement Director, David Zapata.

Republican leaders made the following comments on the announcement:

RPT Chairman Steve Munisteri commented, “It has long been a goal of mine to implement year-round statewide Victory operations. I am very appreciative of the support and encouragement the RNC has provided under the leadership of Chairman Reince Priebus. He shares the common goal of promoting our conservative principles to every community in every area of the state. I am especially appreciative of Commissioner Craddick’s exceptional work as our Chairman for Victory 2014 and her commitment to raise sufficient funds to carry forward funding for the 2016 effort. Finally, I would like to thank our excellent engagement and Victory staff for contributing to landslide wins in November. It is my hope that future State Chairman and future SREC’s continue the practice of beginning to work on the next election the day after the previous election is over.”

RNC Chairman Reince Priebus stated, “The Republican National Committee recognizes the importance of Texas and its 38 electoral votes. Texas is the largest Republican controlled state and I am committed to thwarting the Democrat’s attempts to turn the state blue. As part of this commitment, the RNC is fully committed to helping states such as Texas maintain their engagement efforts to reach the Hispanic, Asian-American, and African-American communities. I also believe it is imperative that we continue our work on a day-to-day and year-round basis. I look forward to working with Texas leadership to ensure our presidential nominee regains the White House in 2016.”

Railroad Commissioner, Christi Craddick, and Victory 2014 Chairman, stated, “I was honored to be asked to be the State Chair of Victory 2014. Working together with the RPT staff, RPT leadership, and our grassroots activists across the state, we achieved record results in the 2014 election. A primary goal of Victory 2014 was to leave in place, infrastructure and funding for the2016 effort, and I am very happy to join in the announcement that we have successfully done so. I look forward to providing whatever support I can to the 2016 Victory Chairman and effort. I look forward to maintaining our Republican majority in Texas for many years to come.” 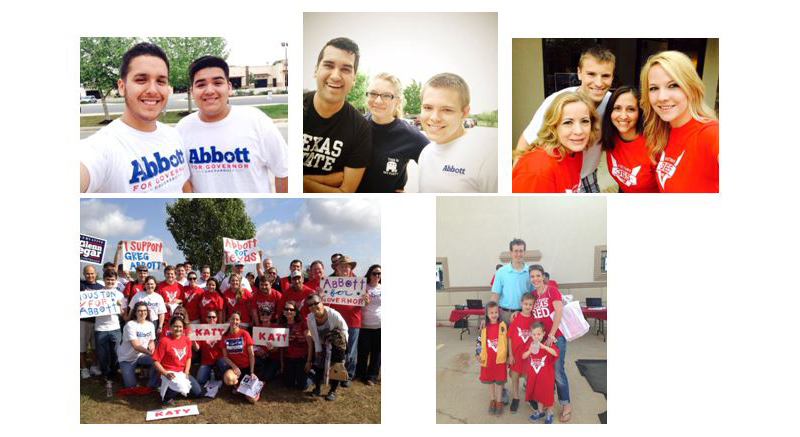