Updates from the Chairman

Thank you to everyone who attended a county/SD convention, and congratulations to all who were elected as delegates to the State Convention! I look forward to seeing you in San Antonio June 11-16. It is your collective voice that sets our Party’s vision for the next two years, and I am grateful for your dedication in walking through the convention process so your input is heard.

Last week afforded the opportunity to see many Republicans from various areas of Texas, and I was excited and energized to visit with many groups.

I spent a couple of days in the Permian Basin. In Midland I spoke to a group at the Haley Memorial Library, which was built to house the original Alamo bell. In Odessa I addressed the Ector County Republican Women’s Club, one of the largest Republican Women’s clubs in Texas. I was also able to meet with Representatives Craddick and Landgraf and some of our Party’s great supporters while in the region.

My next stop was Houston. While there, I attended the fabulous Harris County Lincoln-Reagan Dinner and saw an incredible number of our Republican elected officials from the Houston area and beyond. The following day I hit the sidewalk to do some blockwalking with our Regional Field Director Mark Irey and new Field Organizer Matt Desguin. Finding out where voters stand and the issues most important to them is always a pleasure.

On Saturday, I had the privilege of visiting many County/SD conventions in the greater Harris County area. It was a wonderful reminder of the strength we gain from being one of the only truly grassroots-run state parties in the nation, and I was proud to meet so many wonderful Texans who care enough to dedicate their time toward shaping and growing the party. I saw many of our hard-working SREC members and county chairs, including Chris McDonald (SD-6), Mark Ramsey (SD-7), Gail Stanart (SD-15), Marvin Clede (SD-17), Fort Bend County Chairman Jacey Jetton, Harris County Chairman Paul Simpson, and others. At the SD7 convention, I presented the Candidate Resource Committee award to Senator Paul Bettencourt for his participation as a Platinum Sponsor for CRC. Thank you, Senator Bettencourt!

Senator Ted Cruz delivered the opening presentation, and then I spoke during two sessions. I’m grateful that our principles provided such a compelling message that even some of the High School Democrats approached me afterward with favorable remarks toward what I showed them of the Republican Party.

Report from the Field

Rommel Lopez and his team continue to grow and reach new voters in Maverick County. Because of his ties to the community, Rommel was invited to participate in the 3-day Noches Mexicanas festival in Eagle Pass. The event allowed Rommel to meet voters and talk about issues important to them including life. Way to go Rommel!

Mark Irey and new field organizer Matt Desguin were thrilled to have Chairman James Dickey to help canvas and discuss the importance of the November election with Houstonians.

A number of our field staffers participated at the local party conventions. Joel James, Jesse Grady, and Cassie Luevano were all able to pitch the training and volunteer opportunities available for all activists and activists-to-be.

Would you like to get trained on Advantage Mobile? Or meet voters while door knocking? Don’t hesitate to reach out to our field team! 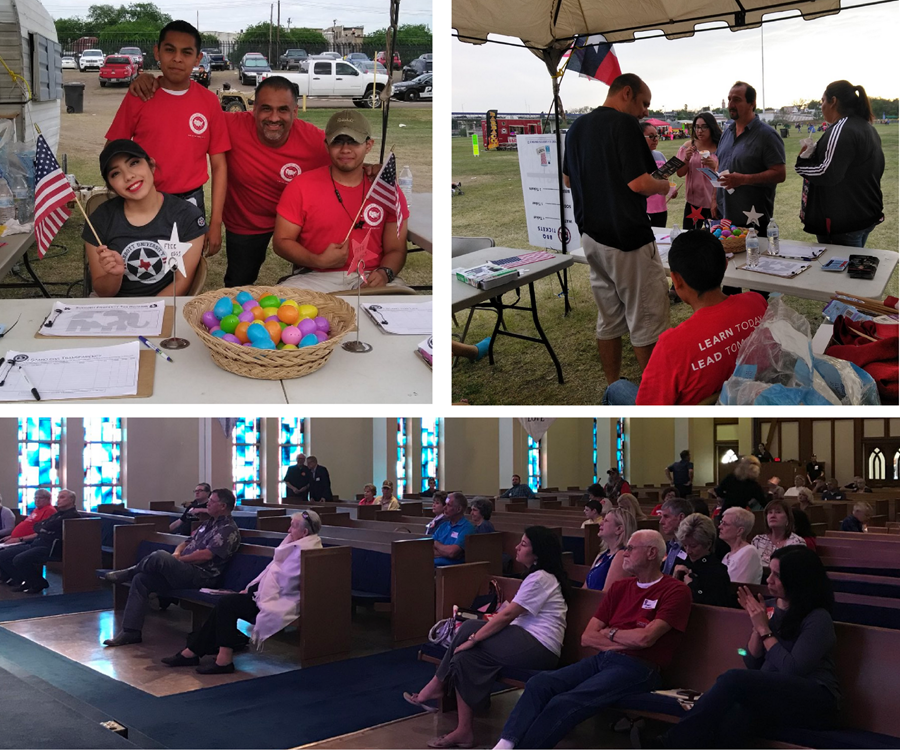 You can find a great deal of information about the convention on our website, including the basic schedule, the line-up of special events, how to volunteer, how to apply for an exhibit booth or become a sponsor, and more. See all of that right here.

VERY IMPORTANT: If you are a delegate or an alternate, you will receive several emails over the next month with important information about convention,  including hotel reservations. The convention hotels will be released to all delegates, alternates and guests after we receive all the necessary information from the County and a senate district conventions — look for that email in mid April. Grassroots Club members get a head start — rooms will be released to GRC members 48 hrs in advance. You can join the Grassroots Club at www.grassrootsclub.com.

The next major Party event will be the 2nd Quarterly State Republican Executive Committee meeting April 6-7. The call has been sent out to SREC members along with an agenda and schedule of committee meetings. You may view that here. We welcome all Texas Republicans to join us in person or via our livestream.

Thank you for the work you do each week to promote our candidates and our principles. We truly couldn’t do it without you.

P.S. If you received this weekly update email as a forward, be sure to sign up for your own subscription right here!